Office of the Library 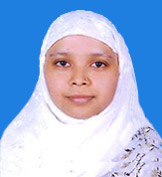 Port City International University (PCIU) Library has been developing from the very outset of it’s launching in 2013. At present, its name is Ratnagarva Begum Ashrafunnesa Library. Ratnagarva Begum Ashrafunnesa is the mother of Mr. AKM Enamul Hoque Shameem, MP, the Honorable Deputy Minister, Ministry of Water Resources, Government of the People's Republic of Bangladesh and the Founder, President & Chairman of Port City International University (PCIU).

Ratnagarva Begum Ashrafunnesa  was born on 10 August, 1945 in an aristocratic Munshi family of Naria Upazilla under Shariatpur District. She studied at Charatra Azizia High School . In 1958, she got married to Engineer Abul Hashem Mia, the elder son of another aristocratic Pike family of Sakhipur Thana under Shariatpur District. When her husband, Engineer Abul Hashem Mia, participated actively in the great liberation war in 1971, she also actively participated in the Liberation War with her husband and brother-in-laws. It is mentioned here that there was a camp of freedom fighters at Pike House. Her four children AKM Enamul Hoque Shameem, MP, the Honorable Deputy Minister, Ministry of Water Resources, Government of the People's Republic of Bangladesh, Brigadier General AKM Aminul Hoque Swapan, Shameem Ara Hoque Kakoli and Dr. Ashraful Hoque Siam have established themselves in their respective fields and that’s why, she was awarded Ratnagarva Mother in 2005.

She played an important role in the establishment of Charvaga Bangabandhu Ideal High School and College, Charvaga Amena Raushan Hafezia Madrasa, Charvaga Pikebari Govt. Primary School and Begum Ashrafunnesa Hashem Ma and Shisu Hospital with 10 bed arrangement on the land given by her husband at Charvaga in Sakhipur under Shariatpur Didrict. Begum Ashrafunnesa Foundation was established in 2008 with a view to providing scholarship and financial support for the poor and the meritorious students. Begum Ashrafunnesa Foundation is giving financial support for the study at Port City International University, Chattogram, students form different schools, colleges and universities including Shariatpur District. The Foundation has provided about 18 lacs scholarship among 482 students of Port City International University. Begum Ashrafunnesa Foundation is also working to stand beside the destitute people during the crises of a flood, winter and various natural disasters. She died on 15 May, 2018.

She was the founder member of Board of Trustees at Port City International University. She contributed to the establishment of the university with her accumulated fund. Considering her great contribution to Port City International University, the University Management took a decision on 01 June, 2018 in the 14th Syndicate meeting and 02 June, 2018 in the 28th Trustee Board meeting that the PCIU Library name would be changed as Ratnagarva Begum Ashrafunnesa Library.

Ratnagarva Begum Ashrafunnesa Library is one of the pioneer libraries in Bangladesh in terms of comprehensive collections , a variety of services , up-to – date technology , professionally skilled manpower , user education, service marketing etc .The library is an integral part of the University and designed to meet the information, research and curriculum needs of the students , faculties and staff.